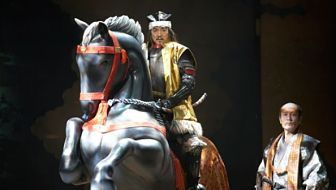 2013 is the 400th Anniversary of Japan-Britain Relations.  It’s a little known, but rather key, fact that the Shogun actually first granted the English permission to reside and trade in Japan on 2nd October, 1613.

Summer 1613 was when the Clove, a ship of the East India Company, passed Nagasaki and then reached the island of Hirado. Its commander, John Saris, brought official letters and presents from King James I of England and VI of Scotland for the Shogun, Tokugawa Hidetada, and the retired Shogun, Tokugawa Ieyasu.

Finally, on 10th October, thanks in part to the assistance of William Adams, known as ‘Miura Anjin’, (an Englishman who had been in Japan since 1600 working with the Dutch and advising Ieyasu), the English were given permission to reside and trade freely, under an official Vermilion Seal Letter (shuinjô).

Marking the start of 2013’s ‘J400’ events celebrating 400th anniversary of the start of Anglo-Japanese diplomatic and trade relations, ‘Anjin: The Shogun & The English Samurai’ will play 11 performances at Sadler’s Wells from January 31 – February 9.  (Stay tuned to JapaneseLondon.com for more J400 event info!).

Gregory Doran’s production of ‘Anjin’, written by Mike Poulton with Sho Kawai, examines the life of a man who served as a vital conduit for Western culture.  William Adams, the “blue-eyed samurai” known in Japanese as ‘Anjin’, was an English maritime pilot. Washed ashore on a strange and exotic land, Anjin soon found himself as the trusted adviser to a powerful Shogun, drawn to the heart of a dangerous clash of cultures and struggle for power, whilst war threatens to erupt. Torn between two worlds and two lives, he must decide who he really is, and where he really belongs.

‘Anjin’ tells an epic and compelling tale of friendship, honour, love and sacrifice. This new production stars the celebrated Japanese actor Masachika Ichimura as the Shogun Ieyasu Tokugawa, with Stephen Boxer in the title role and an international cast from Japan and Britain. The play is performed in English and Japanese with surtitles.

To enter a draw for a pair of tickets to ANJIN on the opening night of Thursday 31 January, 7.30pm, Sadler’s Wells, please ‘like’ JapaneseLondon.com’s facebook page here, before midnight 24/01/2013.

Winners will be notified (by a message on facebook) on 25/01/13.  If you do not receive a message, you have not been successful.

Previous post: ‘The Woodsman and the Rain’ DVD Review