A gritty, gripping coming-of-age drama, ‘Harajuku Girls’ premiered at the Finborough Theatre in February 2015 and is on until Saturday March 21st, 2015.  Thank you for inviting JapaneseLondon.com in to review!

Graduating from high school is a familiar rite of passage. It’s an exciting, bewildering, slightly terrifying time. For the three main characters of ‘Harajuku Girls’ it’s a time to live fast, discover their limits, defy their parents – and less familiarly – to work in one of Tokyo’s ‘image clubs’, earning vast sums of money for sexual role play.

In the UK we tend to have an image of ‘Harajuku Girls’ – those who dress up in costumes (‘cosplay’) and hang around Jingu Bridge – are weird, but indulging in good, clean, fantasy fun. For most, this might be true, but our characters here are tottering on the precipice of exploitation as they seek to fulfil their dreams. The play cleverly delves into the dimensions of the different characters – Haruka Abe’s Mari is seemingly vulnerable on the outside but possess a steely core as arguments with her corporate drone father (Nomo Gakuji) demonstrate; Elizabeth Tan’s Keiko is sassy and wise beyond her years, hiding her damage and emotional troubles inside. 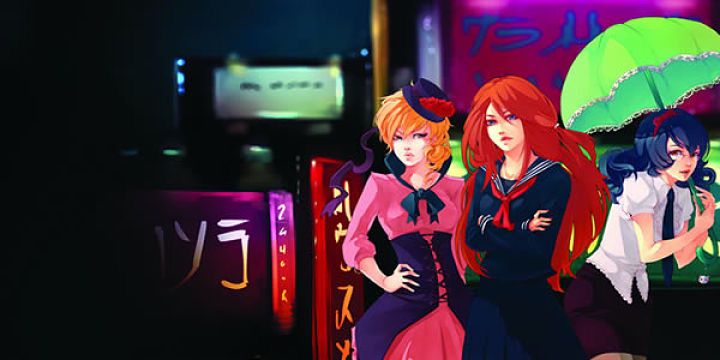 It is Keiko who first takes a job at the aforementioned ‘image club’ called ‘House of Red Leaves’, but when Mari realises working there could raise the ¥1million she needs to attend acting school, she too takes a job. The girls dress up as brides, schoolgirls and cheerleaders to entertain a motley crew of middle-aged men unsatisfied with their wives, careers etc. Fumiko, played by Kunjue Li, is an older girl who has worked at the club for a while and acts as a measuring stick for Keiko and Mari – they often remind themselves it’s just a short-term job lest they end up like her.

Unfortunately, the underworld has a tendency to suck you in. The disparity between the two girls and their other high school chum, the innocent Yumi (also played by Kunjue Li) becomes increasingly obvious as the play progresses. While Keiko and Mari spend their days getting groped by married men and their nights popping pills in grimy clubs, Yumi works as a lift operator (only in Japan!) in a department store and spends her nights wearing a comfy rabbit onesie. Yet it is the cutesy, ordinary Yumi to whom Mari turns when things go wrong.

The set design by Cécile Trémolières is masterful. Finborough Theatre becomes an impressive variety of locations; from sex club, to the dining room of Mari’s family home.  The centrality of the two sliding doors in particular allows for some clever switchovers, twisting audience perceptions of the scene’s location. Other reviewers may have complained of too many set changes taking too long, taking the suspense and drama out of the play, but given that the theatre only seats fifty people it was a clever use of the limited space.

Francis Turnly’s script makes great play of the distinction between conformity and rebellion, real life and fantasy. The apparent desire of Japanese people to escape the routine of everyday conventions – in the big cities at least – into strange fantasies is explored with some pathos throughout the play. Perhaps the play can be best summarised with the familiar Japanese saying “the nail that sticks out gets hammered down”, as Mari’s mother remarks during a kitchen table chat. Society functions as a heavy hammer hitting these girls – who dare to stand out – squarely on the head.