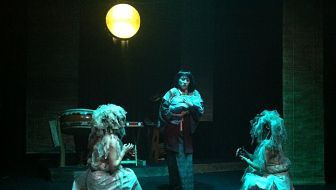 Theatre Témoin‘s powerful, ambitious JUKAI whisks you away on an action-packed journey with a host of spirited characters.  Set in Japan, near the ‘sea of trees’ at the base of Mount Fuji, interwoven stories lead the audience deep into an ominous stretch of forest, as well as deep into the lives of colourful characters.

JUKAI, now playing at the Blue Elephant Theatre, is a remarkable production in more ways than one.  Most outstandingly for me, it is an excellent example of true international cooperation.  In fact, JUKAI has grown organically since its first performance in 2008 – with the devising cast and creative team of Japanese, American and European members having first met at the London International School of Performing Arts. 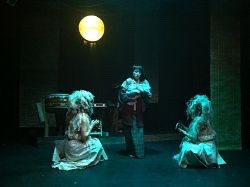 That is surely why the international cast weaves their web of interlaced stories so effortlessly.  More than just characters playing their part; the actors seemed truly connected and engaged with the story they conceived together.

Attention-grabbing from the start with highly comical masks for the caricatured Samurai and his defenceless victims, JUKAI moves swiftly from laugh-out-loud funny to more serious matters.  Central to the story is a peasant girl, played convincingly by Tomoko Komura, who has been forced to carry a baby by the local ruling Samurai warlord.

We soon learn the girl’s, along with her masked family’s, relationship with a young foreign writer’s imagination.  The writer, played by Julia Yevnine, and her photographer partner, played by Bradley Wayne Smith, agree to enter the forest.  There, tragic endings become much more vivid than they had expected.

Creative use of percussion instruments directed by Ikuyo Conant and musical artist Nao Masuda is integral, adding greatly to the movement of the play which culminates in an exciting Japanese traditional drumming taiko finale. 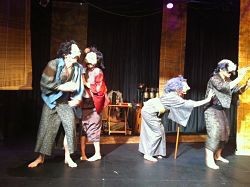 The plays certainly packs a lot into an hour: starting out on a rather silly note, yet leaving the audience reverberating with the profound beat of the taiko drums and the buzz of their thoughts as they sort through the events of the performance.  A satisfying experience!

Speaking to Tomoko Komura after the play, I learned how the play, first performed as a work-in-progress in 2008, at last came together about a month ago after 4 weeks of intense rehearsals.  Directed by Ailin Conant, JUKAI fits perfectly into the Blue Elephant Theatre in Camberwell – a friendly, intimate venue that is well-worth supporting.