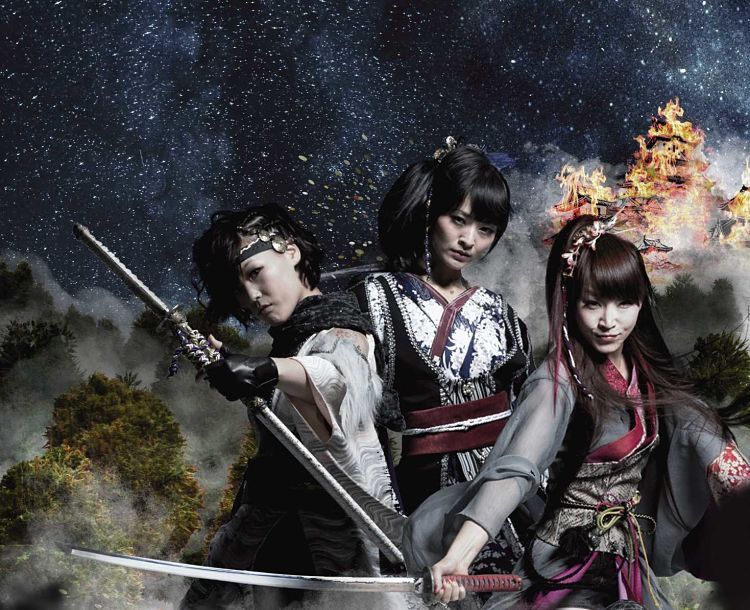 Coming to Stratford Circus Arts Centre in east London, from November 24th – 28th, Kuli-Kala is a brand new action-packed stage show. Featuring Samurai and Ninjas struggling to join forces to defeat the Shogun, there are swashbuckling sword fights, dynamic choreography, music, song and an intriguing narrative to bring this dramatic story to life.The colourful, stylised aesthetic puts me in mind of Mika Ninagawa’s film Sakuran, or perhaps even a little bit of Quentin Tarantino’s Kill Bill, both of which I consider a visual treat of the highest order – how exciting to see this kind of spectacle live!

A musical drama set in the 16th century in the mythical province of Zipang, Kuli-Kala is about a young Samurai who sets out on a journey to seek revenge against an evil Shogun who has wiped out the Samurai’s entire family. During his journey, the Samurai encounters three female Ninja warriors (Kunoichi) whose families have also been slain by the same Shogun; each has been forced to have a large tattoo – the Kuli-Kala or Acala the God of Fire – emblazoned across her back. But the tattoo possesses magical powers and forces the Ninjas to attack the Samurai against their will.

Kuli-Kala is performed by 30-DELUX, the hugely popular Japanese theatre company who specialise in Ta-Te, a ritualistic style of mock sword play. The dashing cast features Junji Shimizu as the Samurai; Masaru Mori as the Shogun; and Minami Tsukui, Ayumi Shimozono and Sena Kaneda as the three Ninja warriors. The story is narrated by an English actor playing the part of a foreign ambassador who witnesses the dramatic events.

The music is an original score composed and arranged by Toshihiko Sahashi, prolific composer of music for a number of anime series and original video animations such as ‘Gundam SEED’ and ‘The Musical Sailor Moon’ as well as movies, video games and musicals, and will be performed live onstage at Stratford Circus. Sahashi’s style is a popular combination of symphonic, classical and rock. A studio recording CD for the Kuli-Kala musical drama will be available. The story is by playwright and director Nobuhiro Mouri (‘Kamen Rider’, ‘Go Busters’ and more) and is set in an imaginary region in the Far East during the ‘Warring States’ period.

KULI KALA kindly offer a FREE TICKET GIVEAWAY to readers of JapaneseLondon.com! Please PM @IsshoniVanessa on twitter before noon on Friday 20th November to be entered into the draw for 2 free tickets to a show on the evening of your choice!

NOTES:
The Samurai were the military nobility of medieval and early-modern Japan; their main weapon and symbol was the sword. While the Samurai numbered less than 10% of Japan’s population, their teachings – loyalty, self discipline and ethical behaviour – are still relevant today.
A Shogun was an hereditary military governor in Japan during the shogunate period from 1192 to 1867 during which time they were de facto rulers of the country.
The 250 years between 475 and 221 BC is called the Warring States Period because the region of the Zhou Dynasty was divided between 8 states. These states had frequent wars until 221 BC when Qin conquered them all.