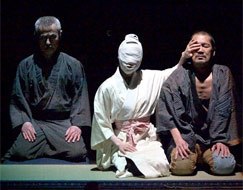 Complicite’s 2010’s production at the Barbican is ostensibly a story about Shun-kin, a cruel and spoilt 19th-century merchant’s daughter, and Sasuke, her ridiculously devoted servant and lover.

Shun-kin the play, however, presents a whole much greater than its parts.  Jun’ichiro Tanizaki’s writings – though internationally famous and well-loved – are here nothing more than a wire coat hanger supporting a delicately light, intricately woven, fluttering silk kimono.

As the play opens, we receive multiple perspectives from an aged Sasuke and a modern-day narrator in an NHK studio before the story elegantly emerges.  Inspired by Tanizaki’s ‘A Portrait of Shunkin’, and a related essay on Japanese aesthetics, ‘In Praise of Shadows’ (both written in 1933), director Simon McBurney’s atmospheric interpretation of Shun-kin’s cloistered 19th-century Japan is deeply understated.  It suggests the magical: a piece of paper is a bird; a stick a shamisen.  Evocative scenes melt into one another effortlessly. 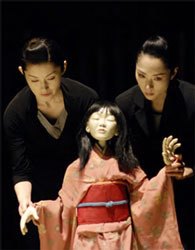 The theatrical animations are as smoothly executed as the white porcelain of the doll’s face, add intriguingly sensual layers.  The video projections, sound recordings and contrasts between light and dark whisk the audience into a continuum of evolving images where story is secondary.  We cannot separate the story itself from the icons drifting through – sticks, dolls, birds, kimonos – nor can we even isolate the actors themselves.  The main character, Shun-kin, is played by a doll at first, becoming more and more intricately animated as her voice, each arm and feet are played by different actors.  Finally, she is played by a human.  Likewise, Sasuke is played by three different actors of different ages.

The audience – large on a Friday night – was rapt.  I heard barely a cough throughout, although the play is just short of two hours with no interval.  The intimacy of the production calls for an investment in a good seat – near enough to catch a waft of cigarette smoke and the scent of an extinguished candle.

I was moved to tears, but not at all by the cruelty of the Shun-kin or the self-sacrifice of Sasuke.  Their story of obsession and domination may titillate, or not, as the case may be.  Instead, I was touched by the sheer organic beauty of interaction between the actors and the set: the shifting of tatami as an elaborate dance; the almost imperceptible moment when Shun-kin is no longer a doll but a real woman.  My over-riding impression: stunningly seamless.

See the Barbican website for more details, and to buy tickets.