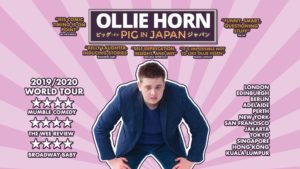 After critically-acclaimed runs at the Perth, Adelaide and Edinburgh Fringe festivals, plus sold-out dates on a twelve-country world tour that wowed audiences from San Francisco to Singapore, and Khatmandu to Kuala Lampur, Pig in Japan comes to London for one 2019 date only.

It’s the story of failed lawyer Ollie Horn who moved to Japan for no good reason, explains what daft things he did on TV there for three years, and why he had to give it all up.

Ollie Horn was a breakthrough act at the Edinburgh Festival Fringe 2019, where he played to sold-out audiences to widespread critical acclaim. Pig in Japan is the unmissable and hilarious tale of one man trying finding himself in a country that wasn’t really looking for him anyway.

This is a show for japanophiles, anybody who has ever felt like a fish out of water, or anybody wants to see the unbeliavably daft things Ollie did on Japanese TV to pay his rent.

Critical acclaim for Pig in Japan:

“Culture shock comedy has been done before, but Pig in Japan is a very fine example. Ollie Horn’s pure and joyous dedication to telling an entertaining tale allows him to incorporate its wider themes almost by stealth; the mark of a gifted storyteller.” ★★★★ The Wee Review

“Even if you’re not a fan of Japanese TV, you will still be caught in fits of laughter with this charming and hilarious show. Ollie is a natural…he sets up the audience for jokes like he is stacking Lego.” ★★★★ Broadway Baby