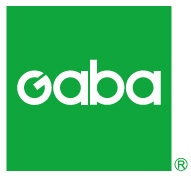 Looking to experience something new in 2019? Why not try teaching English in Japan?
Gaba Corporation is the leading one-to-one English language school in Japan, with 44 locations spread across the major cities. Instructors have the benefit of a flexible schedule which they design monthly, with no minimum or maximum number of lessons needing to be taught each month. Our clients are motivated adults with varying goals and interests, and there is a large focus on development for Instructors in the form of different workshops and mentorship. Career opportunities are also available. Teaching English in Japan with Gaba is a great opportunity to live in the exciting culture of Japan and gain some valuable professional experience at the same time.
We are looking for applicants who possess the following:
• Solid people skills
• Good command of the English language
• Ability to work independently
• Desire to live and work in Japan
• TEFL/ TESOL certification or ESL experience preferred
Testimonials from current instructors available to watch at our website.
If you are living in or near any of the following locations, please come along to one of our Information Seminars in August 2019 to meet a recruiter and learn more about Gaba:
• Manchester – August 8th (evening)
• London – August 10th (daytime)
If you are not able to attend our Recruiting Event, you may still apply for a position to come to Japan to teach with GABA through our website.

Sung in English and Japanese without surtitles.

Music and Libretto (English and Japanese) by Verity Lane


Coco Sato is an award-winning Japanese artist based in the UK. Her work uses origami to change the way people see the world.
https://www.facebook.com/GiantOrigami/

Mirei Yazawa is a performance artist based in London.

Beibei Wang is a genre defying percussionist based in London.
https://www.facebook.com/beibeiwangmusic/

Tomoko Komura is a London based performer from Japan, trained at the London International School of Performing Arts with an MFA in Lecoq-based Actor-Created Theatre (2006). She has performed and toured in shows by award-winning theatre companies such as Theatre Ad Infinitum (Ballad of the Burning Star), Theatre Témoin (Jukai) and Out of Chaos (Out of Chaos).

Kiku Day is a shakuhachi player based in Denmark.
http://www.kikuday.com/

Hester Dart is a London based contralto and graduate from the University of Leeds. They study with Prof. Neil Baker and are currently finishing their second year at the Morley College Opera School. Hester is particularly interested in promoting the work of
LGBTQ+ composers and musicians. They would like to contribute towards a more inclusive and accessible environment within classical music and opera.

Rowan O’Brien is a renowned animator and 3D artist from the West Coast of Ireland. He mixes sketches, objects, computer animation, and video in his work. He has screened and exhibited work across Europe, South Korea and Japan, where he lived and studied Japanese fabric craft known as oshie. 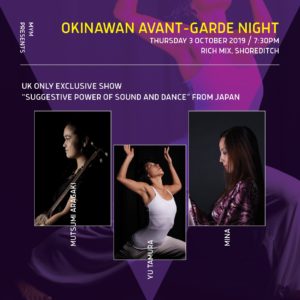 By blending songs, stories, images and movements together with Japanese performing artist Yu Tamura, this new collaboration invites the audience to discover the unique and rich culture of Okinawa with a highly artistic perspective. 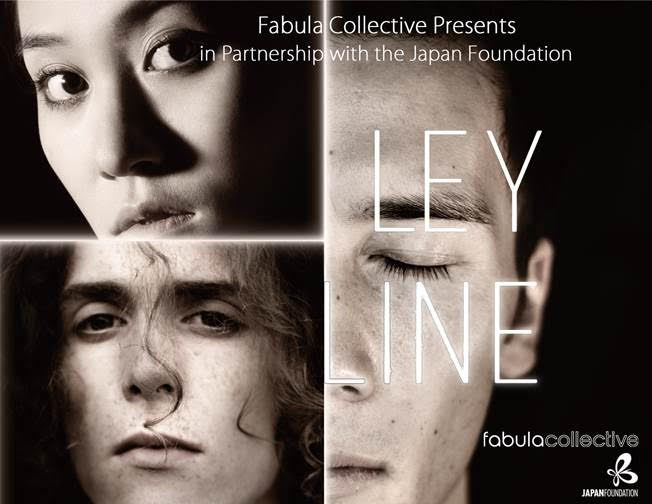 “Four striking works align, taking the audience on an exploration of reflection, purification, self and identity. Together we navigate an energetic path that illuminates the significance of our connection as human beings through unspoken word.”

The Japan Foundation is delighted to partner with Fabula Collective on a contemporary dance production presented at Sadler’s Wells this October. A mixed bill performance choreographed by James Pett, Travis Clausen-Knight, and Japanese contemporary dance artist Kahiko Narisawa, the project emphasises the collaboration between Japanese and British dancers, bridging the cultures of the two countries and facilitating a meeting of minds to exchange skills, knowledge, technique and creative ideas.

The performance will be followed by a conversation between the dance artists and Sanjoy Roy, dance writer and critic for the Guardian. 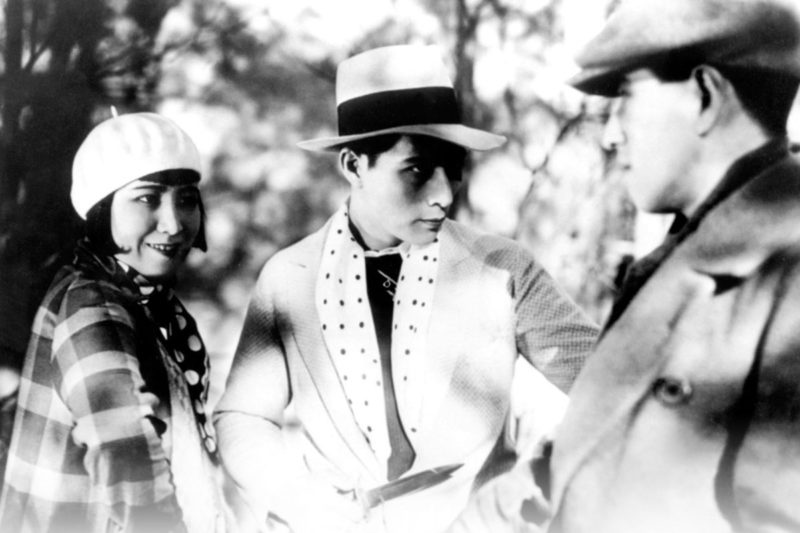 The silent films screened in Japan from the 1920s to late 30s were never completely silent. Katsudo-shashin benshi, or benshi for short, were voice performers, who delivered live narration that provided everything an audience might need to appreciate a film by enacting characters in a theatrical manner (playing multiple roles with a variety of voices) while sitting or standing beside the movie screen.

Although known for the minimalism of his later work Ozu (Tokyo Story) had grown up devouring Hollywood movies. This is a delightful Tokyo spin on a classic gangster tale of Kenji (aka Ken the Knife) a thief who likes drinking and fighting. When he falls in love with sweet and simple Yazue, and she finds out what kind of man he really is, she leaves him ‘until he becomes an honest person’. But it is not easy to get rid of one’s past.

A panel discussion and Q&A led by Bryony Dixon will take place after the screening.

This performance depicts two Japanese goddesses, one phantom, and one modern woman, by dance of Misuzu and the music of Shin’ichi Isohata and Naoyo Yakushi.

Many of the origins of religion in all world were goddess faith. God or monster has the back and front faces that are intrinsic as same as humans (although I think originally God should not be such an existence..). Every existences have good and evil, and also there has sadness in the bottom of the heart. However, sometime the sadness might be become to mercy or hope. Music wander between reality and mythology with abstract, minimal sound, and Japan sensitivities etc… for realizing the true happiness in heart.” – Shin’ichi Isohata

At the Cutting Edge: Experimental Sounds of Asia, presented by the Bagri Foundation, is a series of concerts celebrating new music from across Asia and the diaspora, performed by natural collaborators and influenced by cross-arts forms.

The first night will see a night of improvisation and exploration. The acclaimed, avant-garde Filipina-American composer, percussionist, and sound artist Susie Ibarra, will perform a set of pieces built around rhythmic cycles; a type of meditation which will weave through tempos, melodies, textures and phrases that move through various rhythms and polyrhythms. Susie has only performed in the UK once before so this will be a rare chance to see her incredible live set.

The Arizona-based band Sunn Trio will play an improvised jazz and desert-rock set, experimenting with the Afghan instrument, the Rubab, alongside a guest musician. Inspired by Indo-Arabian sounds and Middle Eastern guitar music, the band is headed up by guitarist Joel Robinson and takes many forms from solo to quartet to a sextet, depending on the space. The concert also coincides with the release of their latest album.

One man band extraordinaire ICHI, from Nagoya in Japan, will give a live performance using his own quirky homemade instruments. These often include (Stilt-bass, Kalilaphone, Balloon-pipes, Hatbox-pedal-drum, Tapumpet, Percussion-shoes and Hattrick-hat) with steel-drum, ping-pong balls, typewriter, toys and everyday objects. To see ICHI live is to witness something so playful and unusual you know that you’re experiencing something entirely new, it is fun it is danceable, it is exciting.

At the Cutting Edge: Experimental Sounds of Asia, presented by the Bagri Foundation,
is a series of concerts celebrating new music from across Asia and the diaspora, performed by natural collaborators and influenced by cross-arts forms.

The Bagri Foundation is pleased to bring together some fantastic collaborators for an evening of electronic, ambient music from Japan, South Korea and London. Japanese underground legend Phew headlines the evening, performing a solo set which celebrates the music she has created over her lengthy career, from jazz to punk and everything in between.

Featured as a Showcasing Artist at SXSW 2016, this will be the first performance in the UK by Seoul-based electronic producer and composer haihm, who is also releasing a new album this autumn. She will be presenting a new work with London-based Korean visual artist Bongsu Park, commissioned especially for At the Cutting Edge.

Café OTO regulars, O YAMA O, inspired by the folk music of Japan, will open the evening with a collaborative set exploring their unique combination of sounds from found object percussion to electronic loops. 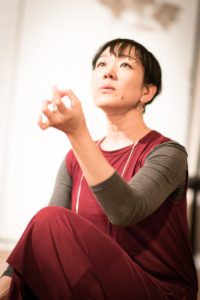 Ami Yamasaki & Charlie Collins, on a short tour marking Yamasaki’s UK debut, arrive at Iklectik for the final performance, where after a short duo set they will be joined by Beatrix Ward-Fernandez and Derek Saw.

AMI YAMASAKI is a vocalist and cross-media artist from Tokyo. She creates installations, performance pieces, and films. With primal vocals and movement, Yamasaki explores the relationship between us and our universe. Her art explores a fundamental question: “How does the world construct itself” For her, the asking of this question is a love letter to life itself, more important than any answers that it yields.

Ami sings as she works, and the patterns she creates are a direct response to acoustic feedback she receives. She sings, and listens, and “little by little, the space begins to make its own music.”
As a vocalist she has collaborated with Ryuchi Sakamoto, psychedelic rock icon Keiji Haino, Yasunao Tone, Ikue Mori, Carl Stone, and Ned Rothenberg among many others, and provided original music for choreographer Makoto Matsushima. Her elaborate installations have been featured in art spaces across Japan, while her short films have evoked a passionate response, and received critical acclaim.

CHARLIE COLLINS is a creative percussionist, free polyrhythmic drummer, and sound artist, based in the UK. His work continues to explore the boundaries between pure sound and rhythm, frequently incorporating metal percussion and free improvisation. Early recordings for cult labels Industrial, Fetish, and Doublevision were soon followed by collaborations with many of the pioneers of free improvisation, while his interest in East Asian percussion and rhythm technique is displayed in current work with komungo player Eun-Jung Kim, pianist Yoko Miura, visual artist Bongsu Park, composer Ryoko Akama, vocalist Ami Yamasaki, and Butoh dancers Mushimaru Fujieda and Tsukasa Kamidate. He is one of a handful of musicians to have played both Derek Bailey’s Company Week and Top Of The Pops.