The Power of Calligraphy 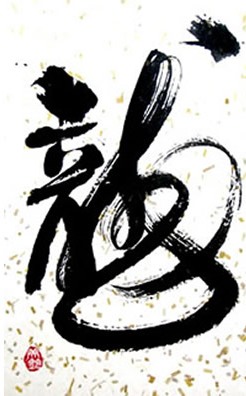 The calligrapher and artist Misuzu Kosaka has produced striking, highly original art works that have been incorporated into book designs, restaurant decors and commemorated major events. In this event, her calligraphy works will be introduced and interpreted by the critic Damian Flanagan. Misuzu will then give a demonstration of her dynamic calligraphy in action and invite participants to pick up a brush, splash the ink and attempt to create their own beautiful calligraphy.

Misuzu Kosaka, a Tottori native and daughter of a poetry-loving Shinto priest, studied under Saisui Ishibashi, a kanji calligraphy master, and Yuri Sato, a kana calligraphy master. Today she is a director and instructor at the Calligraphy Education Society of Japan.  Misuzu has pioneered innovative ways of using calligraphy in modern artworks through solo exhibitions, charity exhibitions and by presiding over her own workshop.

Damian Flanagan is an award-winning author and translator who has published a number of books on Japanese literature. He has also written widely on Japanese politics, arts and society for publications including The Japan Times, the Asahi Shinbun, Newsweek and the Nihon Keizai Shinbun. Yukio Mishima is his latest book, published in October 2014.  He lives in Manchester and Nishinomiya, Japan.

Next post: New Approaches: #MeToo in Japan and the UK

Previous post: Closing the gender gap by 2030: Lessons from Japan and the UK