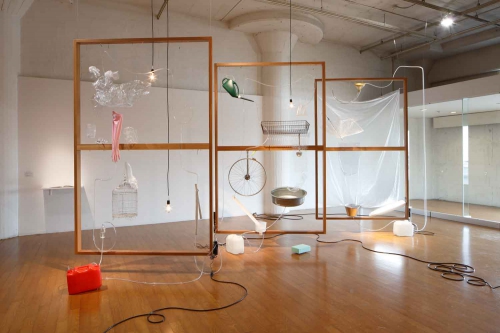 Following her residency at Camden Arts Centre in 2016, Yuko Mohri returns with a new installation that orchestrates relations between electromagnetic force-fields, patterns of light moving through water and a reconfigured Yamaha reed organ from 1934. Developed responsively to the architecture and surrounding environment of the galleries, Mohri’s audio-spatial composition reveals the interconnectedness of man-made and natural processes, inviting non-human agents and chance factors to determine the score.

In this new commission, error, improvisation and feedback figure in an acoustic environment that maps shifting relationships between material things and conceptual propositions. Music and sound are central to Mohri’s practice. Her involvement with the experimental music scene in Japan has included collaborations with Otomo Yoshihide and the internationally acclaimed composer, pianist and electronic musician Ryuichi Sakamoto. As part of Voluta, sound art pioneer Akio Suzuki will perform live in the gallery.

Yuko Mohri (b. 1980, Kanagawa, Japan) is an artist whose installations detect invisible and intangible forces such as magnetism, gravity and light. In 2015, Mohri received a grant from the Asian Cultural Council for a residency in New York. She has participated in a number of exhibitions both in Japan and abroad, including the 14th Biennale de Lyon 2017 (France), Kochi-Muziris Biennale 2016 (India) and the Yokohama Triennale 2014. Mohri is the Grand Prix winner of the Nissan Art Award 2015 and is also the recipient of Culture and Future Prize at the 65th Kanagawa Cultural Award in 2016 and the New Artist Award at the 67th Japanese Ministry of Education Award for Fine Arts in 2017.