‘Akage no An’ – ‘Anne of Japan’ Film Kickstarter Campaign 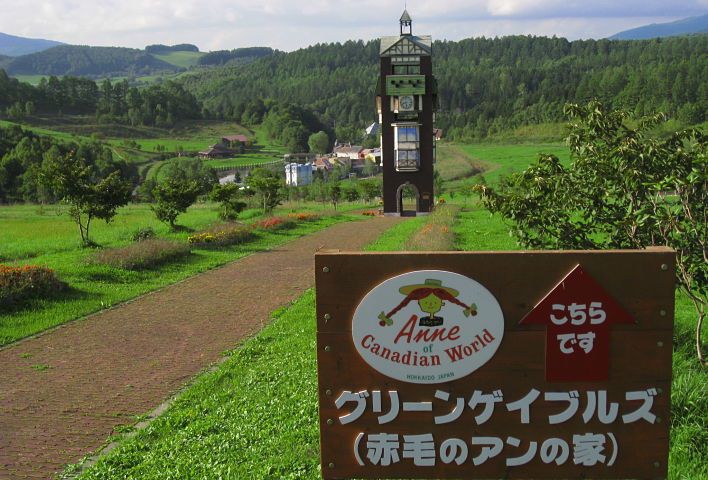 'Canadian World' in Hokkaido: 'Green Gables (House of Akage no An) this way'

Canadian World in Hokkaido: ‘Green Gables (House of ‘Akage no An’) this way’

The mischievous, red-haired orphan known as ‘Anne of Green Gables’, from the bestselling 1908 novel by Canadian author Lucy Maud Montgomery, is big in Japan.  This isn’t news to most Japanese people, who know her fondly as Akage no An (literally ‘Red-haired Anne’) but it’s surprising how often I’ll mention the fact to a fellow Canadian to be met with a vague smile of incomprehension.  Usually, the next question is “Why?”.

Last September I decided to go to Japan to finally satisfy my own curiosity.  I’ve always wanted to visit Japan.  I grew up on Prince Edward Island, the book’s setting, so I was keen to understand how it came to be that our Canadian cultural property eventually became massive in Japan on her own terms.  My goal was to research a documentary on the subject called Anne of Japan. 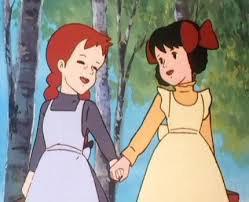 ‘Akage no An’ with friend Diana

Back in 1952, a translation of Anne of Green Gables by Hanako Muraoka was published.  It was shortly after the war, and Japan was still devastated.  Not only was the country’s mostly wooden architecture destroyed, but also many of its books burned up in the flames, leaving people with nothing to read.

One of the people we interviewed for Anne of Japan was Takashi Suzuki, CEO of St. Co., a big company with a headquarters in Tokyo that began staging a musical version of Akage no An back in 2003.  He was a boy during World War II, and told us how he was given a copy of Anne of Green Gables to read by an older girl.  It affected him deeply.  He also mentioned that, because his family’s books and home had been destroyed during the war, there was nothing else available to read.

So the fact that Anne of Green Gables had just been published, combined with the fact that there was, for a lot of people, no other literature, almost guaranteed the book’s success.  But that’s not the only reason the book was so popular.

The character of the girlish heroine, Anne Shirley, resonated with Japanese women in particular, and people in general on a lot of different levels.  The timing of the book’s publication was perfect.  It also told the story of an unloved orphan persevering in the face of adversity. For Japanese women, Anne presented a role model for how to express themselves while still, in the end, doing the right thing in sacrificing her own ambitions to the needs of her family. Anne Shirley still acts today as a peculiarly Japanese feminist role model.

In the early 1980s, there was an Anne of Green Gables fan club called Buttercups, who were the first Anne-specific tourists to visit Prince Edward Island as a group.  Since then, tourism has ratcheted up over the years, with a major dip occurring after 1997 and slowly recovering since then.  This March sees the broadcast of a 156-part morning drama depicting the life story of Hanako Muraoka, and also the Blu-ray release of Nippon Animation Co.’s magnificent 50-episode Akage no An anime TV series from 1979.  The show was directed by Isao Takahata and was an early job for Hayao Miyazaki, who both went on to form Studio Ghibli.  Prince Edward Island is expecting a surge in tourists this summer! 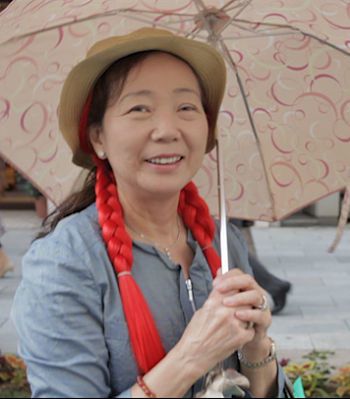 ‘Akage no An’ Fan in Wears Red Braids

While I was in Japan, I conducted several interviews in Tokyo and also visited the ‘School of Green Gables’ in Okayama.  It’s a nurse training institution that opened in 1992.  What was striking about visiting the place and talking to the school’s director and several students was that they are quite serious about transmitting the values of Anne Shirley into the institution.  All of the students we talked to commented that when they were researching which school they wanted to apply to, the ‘Anne of Green Gables School of Nursing’ impressed them with how warm it was compared to other institutions.

In Hokkaido, I visited the town of Ashibetsu, home to ‘Canadian World’, a theme park that opened in 1993.  Although the theme is Canada, the park’s main feature is an exact replica of the Green Gables house in Cavendish, Prince Edward Island.  Touring this place was an eerie experience for me, because I’ve visited the actual Prince Edward Island house on many occasions.  Walking through an exact copy of it in Japan was truly surreal.  As for a lot of theme parks in Japan that were constructed during the 1990s, times have been tough since the economic collapse in 1997.  ‘Canadian World’ today is basically empty, although the park is kept in immaculate shape by its groundskeeper, who was very accommodating in showing us around.  I couldn’t shake the weird feeling, however, that we were alone in an empty theme park.

The Japan trip was a fascinating experience that gave birth to new friendships.  I started the anneofjapan.com website and started blogging about the film.  The project has been a “labour of love” up until now, but I have decided to launch a Kickstarter campaign to try and complete it.  If you find this story interesting, please do contribute to the Kickstarter here.

The subject matter is niche, and unusual, which is why Kickstarter is a good platform.  It’s designed to attract support from like-minded people.  Institutional broadcasters and production companies are too risk-averse to finance a project like this. However, the Kickstarter campaign has been great for making contacts with other people enthusiastic about the subject. While the boost provided by a successful Kickstarter campaign would certainly be great, the film will end up being made according to its own pace. This coming year looks to be the perfect opportunity for such a film to be made, with a renewed interest in all things ‘Anne’ emanating from Japan.

Your support is much appreciated!

Next post: Natsukashii! – Beautiful Film Journey from Kyoto to Tokyo, through Nara