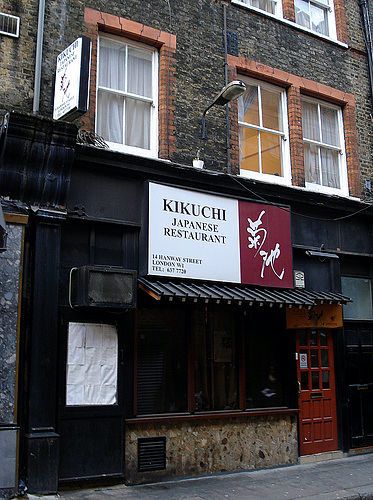 Why? For a Japanese-y committee meeting, so we weren’t in the upstairs part of the restaurant, but rather downstairs in a private party room with typical bench style seating and cushions – quite nice.

When? A Monday in July at about 6.30pm. The restaurant was pretty empty when we walked through at that time. When we left several hours later, it was busy for a Monday.

Impression: Feels really traditional, right from the very genkan. Like many Japanese restaurants, it is untouched by fashion. A rack of handy free Japanese publications stands to the left as you enter the restaurant, and to the right is a brightly-lit sushi bar.

We were given a hearty ‘Irrashaimase’ from the staff – always pleasing.

Prices: Average, for way above average food.  Nevertheless, £3 for a tiny scoop of Adzuki bean or Green tea ice cream is far, far too much.

Service: Very pleasant female Japanese waitresses. The only minor glitch in the proceedings was the beer shortage detailed below.

Description of food and drink: We started with drinks – always the best tactic when you’ll need to converse in a non-native language, I think. We were after large, 500ml bottles of beer, as often served in Japan. They didn’t have those, so we ordered draught Asahi. The draft was off, so we ordered small bottles of Asahi. They didn’t have any, so we had Sapporo. Which was fine – really.

A Japanese guy I hadn’t met before ordered all our party’s food. It’s always hard to please everyone, but I was gutted about the omission of sushi/sashimi! By all accounts, Kikuchi’s sushi is fantastic, and there is a dedicated sushi chef behind the sushi bar too.

What I can tell you is that it is worth visiting for the karaage fried chicken alone. It melts in your mouth. The powdery coating, drizzled lightly with lemon juice… wow! The Japanese natives even declared it better than in Japan! AMAZING.

Toilets: Unmemorable (which is good).

Come again? I have to. I must try the sushi. And order at least five portions of karaage.