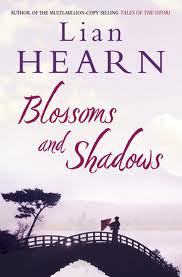 Blossoms and Shadows is an absolutely riveting piece of historical fiction which brings alive a fascinating period of late nineteenth century Japanese history.

Japan, which had been kept largely closed to the rest of the world from the late 1630s onwards was gradually being prised open. By 1854 the Treaty of Kanagawa had been signed opening the ports of Hakodate and Shimoda to the United States, and treaties were signed with Russia and the Netherlands in 1855. Extraterritoriality was granted to Americans in Japan in 1857 and commercial treaties were signed with the United States, Britain, Russia and France in 1858.

The book is replete with characters, some of whose names change depending on whether they’re using their adoptive family’s name, and events. It can’t be read half-heartedly and I admit to having reached page 234 and then re-commenced the book in order to read it with more care and attention. This was certainly worth the effort.

For those unfamiliar with Japanese history the book might prove difficult in places but the reader owes it to the author to persevere for it is Hearn who has done all the graft, i.e., years of research which she has then distilled and made accessible to us through this book. Making the effort with Hearn’s novel pays off as the reader is rewarded with a richly layered story set in remarkable times.

Hearn centres the book on a doctor’s family living in the village of Yuda in Choshu.  From this kernel the story sprawls out ambitiously, portraying a historically-based account of events gripping Japan at large. The Itasaki family itself can be perceived as being subversive, mirroring Choshu’s attacks on the status quo. Yunosuke Itasaki, the doctor and head of household, is an extremely enlightened man for his times being compassionate and with ambitions for his daughter Tsuru beyond marrying. Unusually for the times, he has her help him by preparing medicines and stitching up wounds.

Admittedly the love scenes can be a little contrived, even funny at times.  … “It was like sleeping with myself. I was both man and woman. I became him, and when it was over and we had fallen into the ecstasy that is near death, I was more myself that I had ever been.’  Tsuru turns out to have ‘insatiable lust’ on occasion, surfacing from ‘the lake of desire.’

The history covered is quite incredible. That Choshu clansmen revolted against the Shogunate in 1865 and were able to defeat it with their superior discipline and equipment is simply extraordinary, as is the story of the Choshu Five who came over to study in England in 1863. The 150th anniversary of this event is sure to be celebrated widely in Japan and the UK in 2013.

As Lian Hearn states in an interview included at the end of the book, the Meiji Restoration is up there with the French Revolution and American Civil War in terms of impact. The next instalment in the story of Japan featuring the last rebellion of the samurai in 1877 would make for another fascinating book.

Blossoms and Shadows and the historical period it spans came to mind when I read a review of Patricio Guzmán’s film Salvador Allende recently. All you need to do is substitute Chile with Japan in order to get a potted appraisal of what happened in Japan during the twilight of the Bakufu and the death rattle of the samurai,

‘What happened in Chile over a period of two decades does not have to do with a particular circumstance or a particular reality. It has to do with human nature, with dreams, hopes, cowardice and the most amazing callousness. And all this is universal enough to speak to anyone who wishes to listen.’ (Pamela Biénzobas on Patricio Guzmán’s 2004 film Salvador Allende in ‘Senses of Cinema’, 8 February, 2005)

I hope Blossoms and Shadows will also encourage readers to pick up Japanese history books.

One of my few criticisms is that it could do with a catchier title.