‘I Just Didn’t Do It’ Film Review 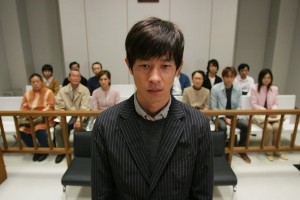 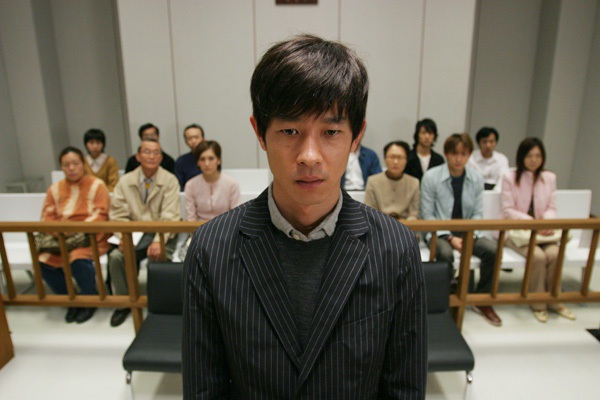 Along with Confessions of a Dog, I Just Didn’t Do It is a damning indictment of the Japanese legal system. The audience palpably gasped at some of the more appalling scenes of unfathomable injustice and clapped as Masayuki Suo took to the front of the ICA film theatre at the end of the screening to answer questions.

This film, Suo’s first in 11 years since his fantastically popular Shall We Dance?, took four years of research.  It was triggered by a newspaper article Suo read about a man falsely accused of being a chikan or ‘groper’ and who successfully took his case to a high court which overturned his conviction.

This was a turning point for Suo as he realised that the Japanese system of justice is nowhere near as fair as he had imagined and that it generally presumes guilt until proven innocent. This spurred him to make I Just Didn’t Do It, a spell-binding courtroom drama which has as its premise that it is better that ten guilty people go free than that one innocent person suffer.

The film begins by swooping down on Tokyo, and its labyrinth of trains. Japanese trains are notorious for their chikan or ‘gropers’ who, amongst the crowds, touch women with relative anonymity. Japanese trains are rife with them. The chikan, if caught, are taken to the police station, made to confess their crime and to show remorse. Paying a fine, they are let loose to continue on their way, perhaps to work, and then return home as though nothing has happened. That they may continually repeat this behaviour is not uncommon.

Twenty-six year old Teppei Kaneko, excellently played by Ryo Kase, is the star of the film. Travelling to a job interview, he makes his way onto a packed commuter train – he is pushed on in fact – behind a 15 year-old school-girl whom he hardly notices as he is more concerned with his jacket which is caught in the train doors. Alighting at his stop, he is accused of being a chikan by the girl and is promptly arrested. A fellow passenger tells the station staff that she doesn’t think Teppei was the groper, but she is disregarded. She is not asked for a statement or for her contact details, just ignored. Teppei is told to own up to groping so that he can be released quickly but he remains adamant that he’s innocent and won’t be made to budge on this.

Teppei is told that he may be kept in prison for three months and that there is no guarantee that he’ll win his case as the conviction rate in Japanese courts is an unbelievable 99.9%.

Teppei is urged by a series of policemen and lawyers to admit blame and walk out of prison; no one would be the wiser. By denying his guilt, however, a long drawn-out investigation will ensue. The iniquity of this is hard to stomach and Suo spares no details as he reveals layers of corruption. Eyewitnesses are ignored, judges are replaced and Teppei’s accuser receives special attention.

Ms Sudo, assigned to be his counsel, visits Teppei and asks him to repeat the story for what must seem like the hundredth time. She doubts his innocence and ends up bullying him just like the police. Returning to her office she says that she hates gropers and that she doesn’t want to defend Teppei as she has insufficient experience. Ms Sudo’s rather world-weary superior, ably played by Koji Yakusho, reminds her that Teppei maintains he is not a groper, that he deserves the benefit of the doubt and that denials and acquittals are so rare, it would be a good challenge for her to defend him.

Teppei is subjected to a series of public hearings with Ms Sudo as his lawyer. She faces an uphill struggle when the initially sympathetic judge dealing with the case is replaced halfway through by a hostile one. As Koji Yakusho’s character explains, a judge needs tremendous courage and wisdom to acquit in Japan and if he does, he garners a negative reputation. The film also makes apparent that judges are looking for signs of remorse in those they are trying regardless of protestations of innocence. It is maddening in its sheer Kafkaesqueness.

Teppei’s supporters do all they can to persuade the judge of his innocence, even filming their own reenactment, faithfully recreating events on the train and showing how unlikely it is that Teppei could have groped the girl and pulled his arm out of the way as she alleged; his arm’s position in relation to the door would not have permitted her version of events.

The judge’s verdict is announced at the tenth hearing.

The film is harrowing in its portrayal of the flawed Japanese legal machine; that this is revealed by an ordinary young man, refusing to be browbeaten, rather than an idealist makes it all the more poignant and believable. We are left with the realisation that, above truth the system values a high conviction rate.

It was heartening, therefore, to hear Suo say that a new system was introduced to Japan three years ago, which is modeled on the jury system.  Criminal cases are now tried by three judges and six people. Further positive news is that Suo was invited to join a Ministry of Justice Advisory Committee with a view to reforming the Japanese justice system. That Suo’s film is being used by Japanese universities in their law courses is testament to the power and authenticity of this film.

The film has deservedly received several prizes, notably several Japanese Academy Awards and the Best Director and Best Screenplay awards at the Kinema Junpo Awards in 2008. Don’t miss it.