Do you ever wonder how to ACTUALLY PRACTICE SPEAKING JAPANESE (without feeling like you’re going to die of embarrassment)?

Would you like a painless way to STOP PROCRASTINATING and START COMMUNICATING in Japanese?

Click the button below to register 👇 for our newsletter, then check your inbox for the booking link + your PDF ‘cheat sheet’ (with examples & scripts).

YES, COUNT ME IN! 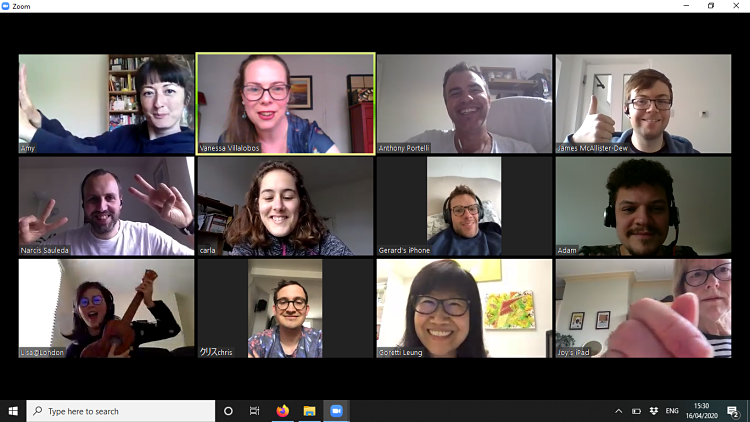 ‘It forced me to speak in Japanese, which is something I have trouble with anyway. It was also nice meeting some other people learning the language. I also really liked the helper sheet you sent through beforehand.’ Adam, April 2020

I know, I know. It sounds ridiculously obvious. BUT it can be very difficult to even find the chance to speak.

That’s why I’m THRILLED to invite you to join our community of people just like you & I. That is, Japan-fans who love all things Japan (as well as native Japanese speakers).

WHO: Any level of Japanese speakers – you need to be able to speak a little, or a lot

WHAT: Small talk is such as important skill, but it can be hard to know what to talk about.

Talking about a Japan-related object via ‘Show & Tell’ avoids those bum-clenching silences you’d need a samurai sword to cut through!

WHY: When I ask most people who are learning Japanese to rate their confidence in speaking Japanese, they usually sit somewhere between “Best Not Talk About It” and “Serious Cringe.”

Barely anyone I speak to feels confident that they’ve got it sussed EVEN if they been studying for years!

If you’re learning Japanese through textbooks, Duolingo and flashcards, but never ACTUALLY SPEAKING Japanese to other real human beings, you’re not alone!

But here’s the thing…it doesn’t have to be that way.

I know this, because I’m a learner who wants to speak Japanese too!

Click the button below to register 👇 for our newsletter, then check your inbox for the Japanese London Conversation Club booking link + your PDF ‘cheat sheet’ (with examples & scripts).

‘It was great there was a bit of content to speak about. I thought that was a good way to do it as it’s not so cold as speaking amongst us which was a bit more difficult for me as I am too shy LOL. ARIGATO GOSAIMASHITA!’ Narcis, April 2020

I love learning Japanese, but I’ve always struggled to practice speaking the language without feeling like I’m going to actually die of embarrassment.

But I had a lightbulb moment when I remembered how much I used to love ‘show & tell’ when I was a kid. That is, having an object – perhaps something I like, or recommend, to talk about.

If you are anything like me, you’ll surely find that a big part of appreciating Japanese language & culture is connected with Japan-related ‘stuff’ – tea, bowls, books, films…

If you can relate, why not join the Japanese London Conversation Club and tell us about something, anything, Japan-related that means something to you?

If you click on the button to join our newsletter list, I’ll send you the booking link and a PDF cheat sheet to get you started.

🙆 ANY LEVEL of Japanese learners – who can speak Japanese a little, or quite a bit

💁 Native Japanese speakers who want to chat to people in London, in Japanese & English

🙆🏿‍♀️ People who used to live in Japan, or learned Japanese in the past, but whose skills are rusty from lack of use!

NOT for you, if you:

Any questions, feel feel to drop me a line: vanessa@japaneselondon.com

‘That was bloody brilliant and I had so much fun!! Thank you so much for arranging this and it was so nice to speak to so many nice people too! Let’s keep in touch!! P.S I can’t believe you have eaten guinea pig!! Anthony, April 2020

I’m looking forward to getting to know you!