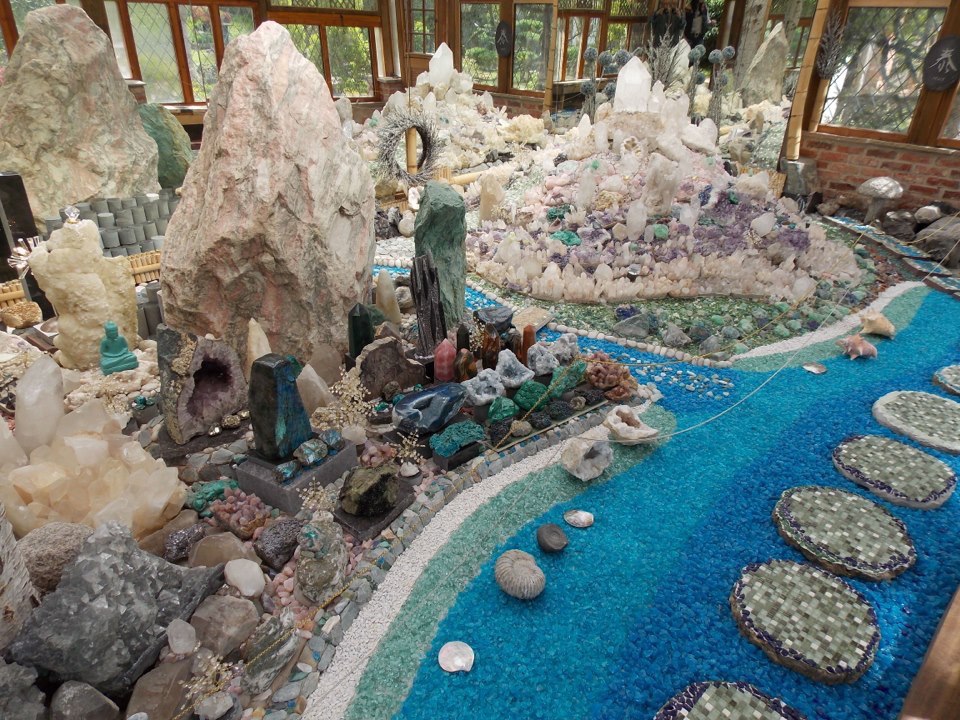 The Japanese and the British both share a deep-rooted appreciation of gardens, even though the chaotic tumble of blooms in an English country garden and the clipped order and raked gravel so characteristic of a Japanese garden couldn’t be more different.  Perhaps that’s why we are so fascinated; Japanese gardens have long been popular in the UK.

The Japanese Garden at Tatton Park is 100 Years Old. via Wikipedia CC Rwenland

One of the first gardens in the UK was ‘almost certainly’ inspired by the 1910 Japan-British Exhibition at White City. Tatton Park in Cheshire has a Japanese garden in a ‘tea garden’ style. All things Japanese seemed fabulously exotic to the British public in the Victorian and Edwardian eras, and this Japanese garden with its Western aesthetic will have been the height of fashion.

Boasting a Shinto shrine and various authentic artefacts, it is reputed to be “finest example of a Japanese Garden in Europe.” The garden can only be viewed from the perimeter except during tours, given on Wednesdays and Saturdays at 1.20pm and 2.20pm for a small fee in  the high season. Visit the Tatton Park website for details. 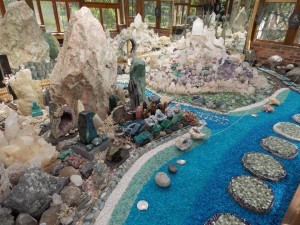 Probably one of the most unusual Japanese gardens in the UK must be the ‘world’s first crystal garden’ in the Pure Land Japanese Garden in Nottinghamshire, which opened in May 2013. This stunning creation has thousands of crystals positioned to represent facets of nature, such as rivers and mountains.

The crystal garden is contained within their more traditional Japanese garden, which features ‘a traditional repertoire of garden elements such as water, carp, bridges, moss, bamboo, evergreens, maples, cherry, and stone lanterns’. Open from March, the entrance fee is £7. In August, you can also experience a magical lantern-lit garden experience, evocative of a bygone age in Japan. 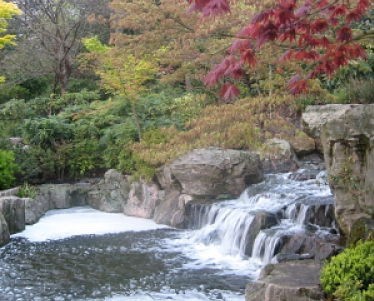 Recommended Japanese gardens in London include the outstanding ‘Kyoto Garden’ in Holland Park, which features a waterfall – scenic in all seasons.  Take an onigiri and sit on the bench to enjoy the peaceful oasis!

Also, the garden in Hammersmith Park, opened in 1950, contains a remnant of ‘Garden of Peace’ from the 1910 Japan-British Exhibition.  The stroll garden has quite recently been restored, and there is a rock garden, pond, and forest garden.

A sublime space in the middle of the metropolis can be found in the Japanese Rooftop garden on top of the Brunei Gallery; a place for quiet contemplation and cultural events.  The gallery is located at the School of Oriental and African Studies (SOAS), near Russell Square.

Kew Gardens is an outstanding destination, starring several Japanese and Eastern architectural elements which add interest to their glorious gardens. 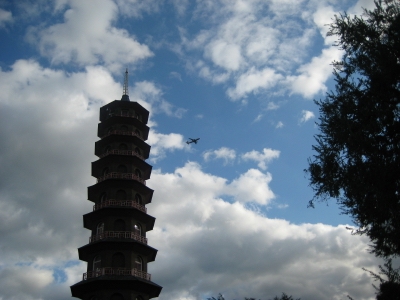 ‘Chokushi-Mon’ in Kew is a 4/5th replica of the karamon (gate) of Nishi Hongan-ji in Kyoto – 16th Century style of ‘Momoyama’, with finely carved woodwork.  The garden’s Pagoda was finished in 1762, and is an interesting example of the time’s fashion for ‘Chinoiserie’.  A traditional Japanese ‘Minka’ farmhouse was painstakingly imported from suburb of Okazaki City, and now stands within a gently rustling Bamboo Garden.  These features and buildings serve as a backdrop to countless Japanese plants and flowers can be discovered all over Kew.

Can’t get enough of Japanese Gardens?

Japanese gardens are to be found all over the UK.  Visit the handy website www.japan-interface.co.uk/gardens/ for a searchable guide of all the Japanese Gardens in the UK and Ireland (also, for a list of suggested books to create your own).

An hounourable mention should be given to the website GreatBritishGardens.co.uk – which offers a good round up of their favourite 15 Japanese gardens in the UK.

If you liked this article, you might like JapaneseLondon’s article: ‘How to Enjoy Cherry Blossom in the UK’

Next post: Top 3 Ways to Speak Better Japanese – in London!

Previous post: How to Enjoy Cherry Blossom #2 – Not Going Out!